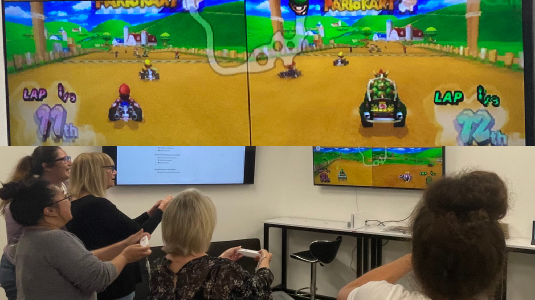 There's no better way to escape a ridiculous two-week heatwave here in Southern California than to gather together for our second annual Mario Kart Tournament!

Our Accessory Power staff were initially broken down into groups of four to race for a chance to win a $50 gift card. The first knockout tournament consisted of six rounds to whittle down our winners into groups of three for the semi-finals. To say it was intense was an understatement...

While we cannot confirm nor deny the possibility of elbows and Wii remotes being thrown, we can concur that the Grand Finale was a sight to behold.

Our last two finalists, Waluigi (Ryan) and Peach (Brandon) put their Maro Kart skills to the test in a Grand Prix: A racing cup consisting of four courses.

It was neck and neck with blue shells and banana's being thrown left and right. Ultimately though, one champion came out victorious and that was Sir Waluigi aka Ryan!

Congratulations! We'll see if he can defend the title in our next tournament.