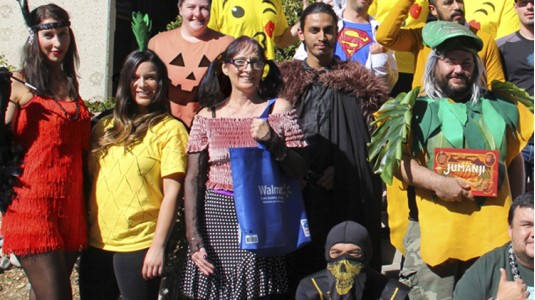 Published In: Company News
We had a blast with the entire AP family at this year’s Spooktacular Halloween celebration! The costumes were imaginative and fun, and folks showed their Halloween spirit with costumes ranging from simple fruits and vegetables to ninjas and snipers. There was even a crazy Wal-Mart shopper and an extravagant 1920s flapper! Halloween is the only time of the year you see characters like Jon Snow from Game of Thrones enjoying a company lunch with everyone’s favorite cartoon aardvark, Arthur!

For Halloween 2018, the costume contest was judged on an individual basis, as opposed to our usual department costume contest. This gave people a little more freedom for creativity and imagination. Gift cards were awarded to the first and second place winners and were voted on by the entire company staff. First place was earned by eCommerce Category Coordinator Lucie Mollard, who dressed up as a flashy 1920’s flapper, and second place went to Product Development Manager Darren Rieger, who creatively brought the 1995 Jumanji character Alan Parrish to life!

Accessory Power decided to add another fun contest to our holiday lineup and encouraged departments to decorate their desks to reflect this ghoulish time of year. As you can imagine, there were cobwebs throughout the office and spiders and bats everywhere! One employee even went as far as turning their desk into a graveyard! Needless to say, the Halloween ‘spirit’ was alive and well here at Accessory Power during the month of October. The Customer Solutions department really stole the show with their decorations and were chosen as best-decorated department for their creepy and creative decor! Until next year!