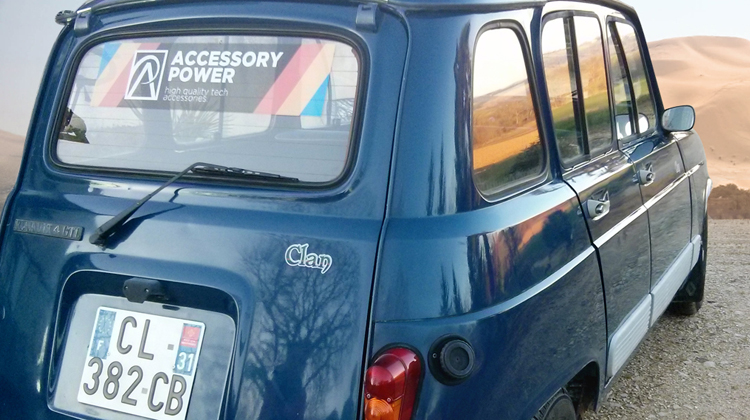 Each year, Accessory Power looks for new and exciting ways to better our community. Whether that community is in our own backyard or overseas, we’ve made a conscious effort to make a difference in the world around us. In the past we’ve worked with such companies as the Fender Music Foundation, Pandas International, Ride 2 Recovery and our most recent partnership with Operation Gratitude, where we sponsored Tom Connolly on his journey across the United States. Humanitarianism is an ongoing project and that project doesn’t stop in 2016.

Shuffling through numerous ideas for 2016, one of our French Interns brought to our attention the 19th Annual Raid 4L Trophy. This race has participants drive a Renault R4 French Car through France, Spain and Morocco in route to Marrakech. The idea started simply as an adventure and has now blossomed into a humanitarian effort. In addition to their own food, each rally team is responsible for bringing 10kg of non-perishable items to the departure villages. The rally cars also transport classroom materials to the Moroccan children, while the race itself raises donations to help build classrooms in the desert.

The Raid started as an idea by Jean Jacques Rey in 1996 and held its first race in 1998 with just 3 teams at the starting line. In 2001, 50 cars participated. In 2005, 460 cars took part and later grew into 1,000 cars by 2008. Thanks to the Raid 4L Trophy participants and sponsors, more than 15,000 children have been able to receive an education due to the equipment and monetary donations. The race begins February 18th and runs through the 28th.

This year we are supporting our friends at Team IH4L on their journey. We wish them the best of luck as the countdown begins. Visit their Facebook page at https://www.facebook.com/ih4l.asso/ to see their story and donate to their cause.

To learn more about the history of the race or how to donate to this great cause visit the website:
http://www.4ltrophy.com/dstcache/www_4ltrophy_com/5414531cef490b589792134bd7ffbe90.html